Why will it be more important than ever before to be an ally?

What is an Ally?

According to Webster’s dictionary, an ally is “one that is associated with another as a helper: a person or group that provides assistance and support in an ongoing effort, activity or struggle'' [1]. By this definition, being an ally goes way beyond accepting people of different races, abilities, genders or sexualities. Being an ally is about providing support, acceptance and understanding to all people regardless of their identities. Allyship is becoming increasingly important in the workplace; as the population demographics change (See: How to be Inclusive), it is important to consider how to best make a comfortable work environment for everyone. Having mutual respect and acting as an ally is essential to both majority and minority groups in order to have open conversations, challenge ideas, and be efficient and productive in the workplace. The more comfortable, safe and confident that a person feels in the workplace, the more likely they are to contribute to projects and put forth their best effort.

In an ideal world, everyone would treat each other with respect and dignity, and people would be allies to every person they encountered, yet this is not the case. There are several factors- some subconscious, that prevent us from being the best and most accepting allies we can be. Bias, which is any type of preconceived notion about a person or group, is inherently not a bad thing. We all have biases and preferences that are not harmful so long as they are acknowledged and managed. Some common hindrances to being a strong ally are: 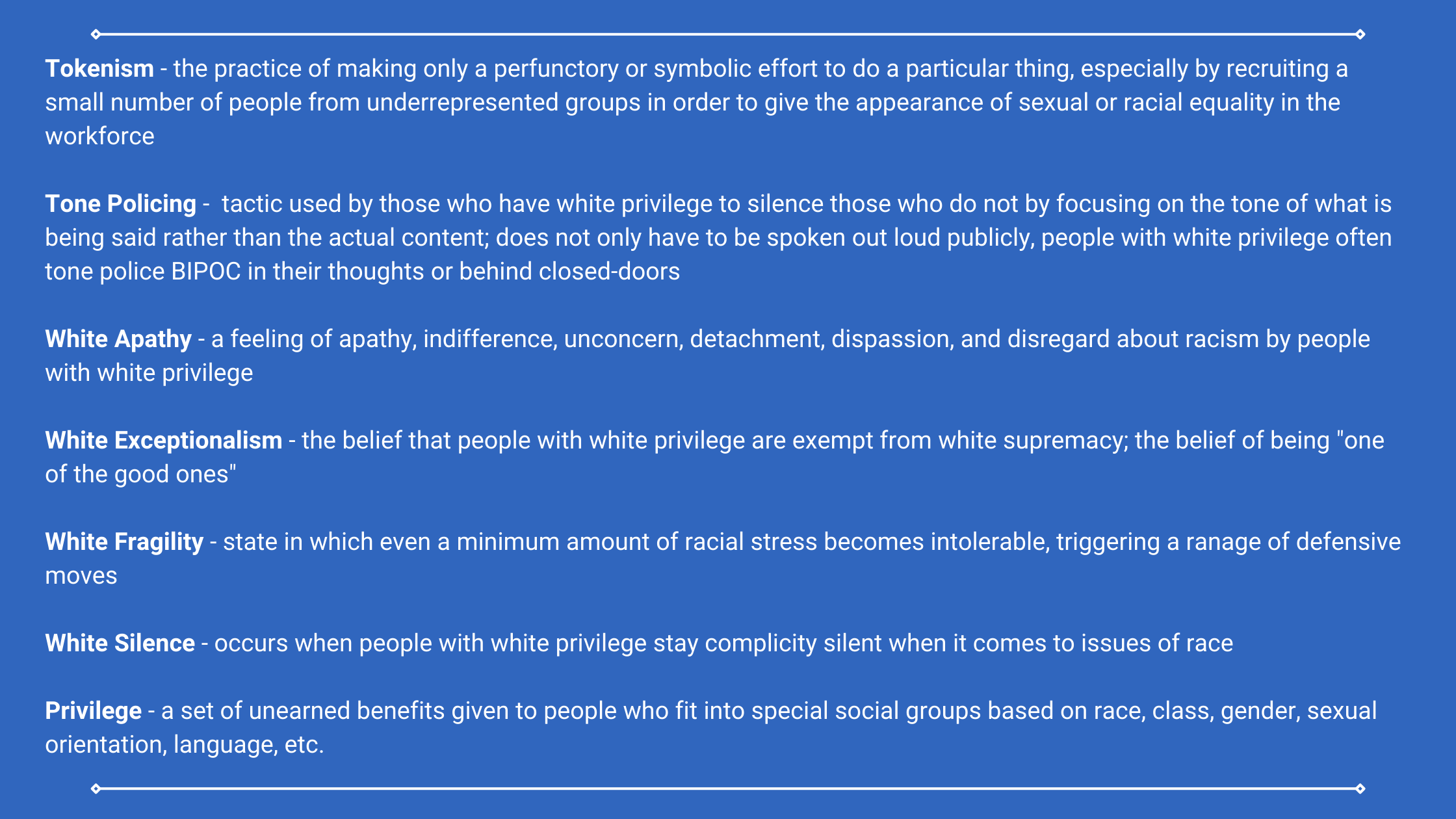 These hindrances are often the root of the most common issues in the workplace. It is important to take the time to learn and understand how each of these may be affecting our work environments and behaviors.

After reading these definitions, take the race implicit bias test to see if you have hidden preferences that you should consider moving forward. 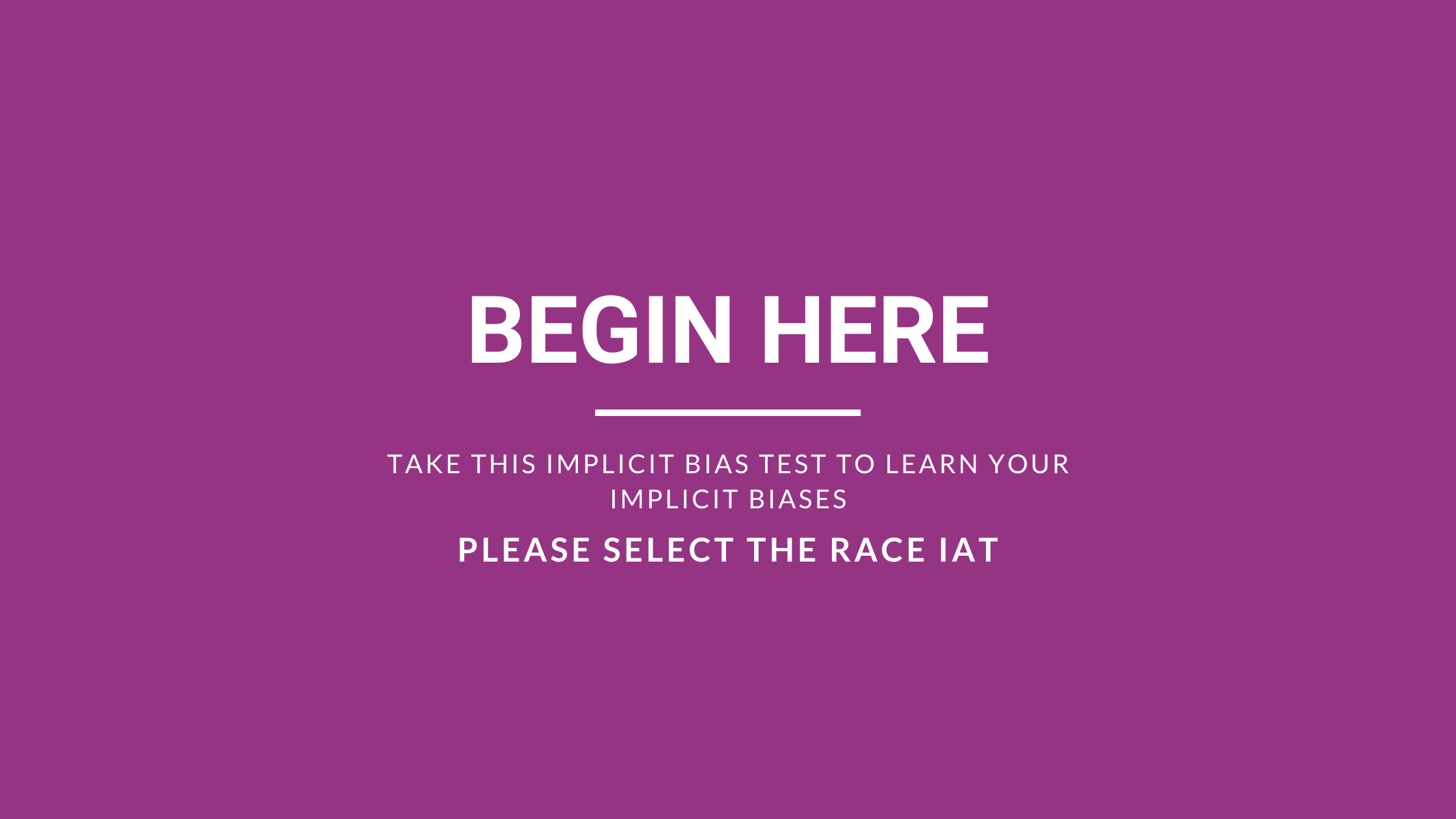 Now that you have received your results from the Implicit Bias Test, consider if your results make sense. We tend to believe that we are bias-free, but in all actuality very few of us are truly impartial. Find your result below to see how to interpret and act on your results:

This is a great start to having an open mind and being a DEI leader in the workplace! Having little to no racial bias is a very strong quality to have, yet it does not mean you do not have more work still to do. Moving forward, you do have less to consider in terms of minimizing your bias, but we recommend that you take further implicit bias tests in other categories to test other biases you may have pertaining to gender, age, religion and disabilities. Using your minimal race bias, you can help to create an inclusive workplace by talking to your coworkers, helping them to evaluate and minimize their own biases, and to continue to keep your biases minor.

Having a slight bias is completely normal, however, it does not mean you do not need to act on it. A slight bias, in fact, can be just as bad as having a strong bias or worse if it goes unacknowledged. Moving forward, you should consider this bias and think about why you have this bias, and what life experiences or interactions you have had that have given you this type of automatic preference. Then, you should decide how to act against this slight preference so that it does not affect your personal or professional decision and success. Automatically having a preconceived preference for some coworkers over others can be very harmful in meetings and projects, and can negatively impact people who you have power over. You almost certainly would never intentionally discriminate or disrespect your coworkers, so it is important to become aware of how you may do this without realizing it and to correct it before it happens. For example, in a meeting, the boss always selects the same 2 or 3 people of their same race to share their ideas first, and never lets people of another race share their thoughts first. This type of behavior may seem harmless and unintentional, but over time, tensions will build and it will cause the people who are of a different race than the boss to feel isolated and unimportant. In this case, you are losing some very valuable assets of your team that could be contributing to the overall success of the meeting and the company, but a simple bias is allowing that to be overlooked.

Having a strong bias is not intrinically negative, as long as you acknowledge and work to minimize it! In fact, this can provide more opportunities for growth and learning. Moving forward, you must be fully aware of the bias you have, and try to pinpoint how that might interfere with your daily life. Then, you have to work on reversing your bias, and acting as an ally to the race that you have a lesser preference for. You should engage in team projects and personal discussion with the race that you do not prefer to listen to different perspectives and to become more comfortable with those around you. If you do not work in a very diverse workplace, or do not have the opportunity to work in diverse groups, consider joining a reading club or other discussion group with a more diverse following. The best way to minimize bias is to find the root of it, and work outward to decrease it. For example, if you grew up in a predominantly white area, you are more likely to be biased against people of color because of a lack of exposure to people who are different from yourself. That means that it is important to expose yourself to more diversity now to open your mind and understanding. Being around people who have different backgrounds than you can be extremely beneficial to widening your perspective, improving your empathy, and increasing the productivity of your teams.

Why You Should be an Ally and Not a Knight (What's the Difference?)

Being a perfect ally is something that will never be achieved, yet it is important to keep striving to get better and closer to that. Below are several different roles that allies can and should take on that will be beneficial in and out of the workplace. Allyship is more than just a straightforward formula to follow, it’s about being flexible according to the circumstances and learning when it is an appropriate time to intervene. 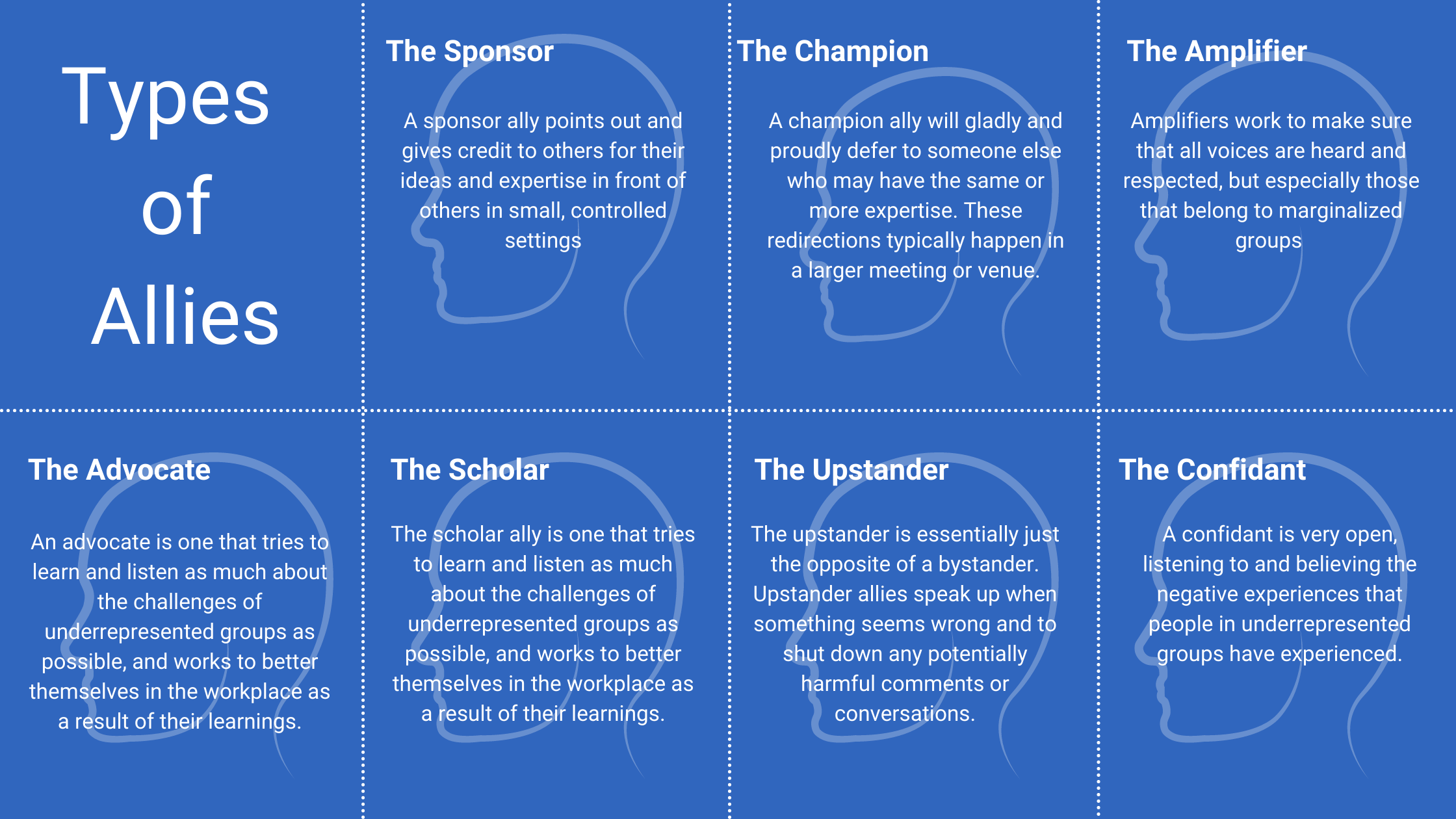 Although allies are traditionally thought to be people of power and privilege acting towards people who lack that same power and privilege, the roles are not always that clear cut. Over the next 20 years, the demographics of the workplace will undergo drastic changes, and we will not have the same structure of people in the minority and majority as we do now. Therefore, it is essential for all people- regardless of race, class, gender, age, education, ability, sexuality or gender identity, to act as allies for anyone else in their work or personal environment. There is no reason why women cannot be allies to men, or why a 25 year old cannot be an ally to a 60 year old. Roles in the workplace will change, but being an ally and developing inclusive environments will always reign important for success.

What Can Challenge Allyship?

Allyship can be challenged by unchecked or ignored biases, privilege, power, seeking a reward, and a lack of true dedication to change. When being an ally, there are certain things that you should avoid. In Me & White Supremacy by Karen Catlin, Optical Allyship and Ally Cookies are defined as some of the pitfalls of trying to be an ally in the workplace. Optical Allyship is “the visual illustration of allyship without the actual work of allyship”, which simply means that you are working harder to make yourself look like a strong ally than actually being a strong ally. You can avoid this by asking your coworkers for their input and striving to continuously improve yourself as an ally. Ally cookies are “praise or other rewards for ‘not being racist’ that is usually sought out by people with white privilege performing optical allyship”. In this case, people who are searching for ally cookies are looking to be recognized as an outstanding individual for acting or appearing as an ally. Allyship is about doing the right thing for the success of the company and its atmosphere, not about receiving rewards or praise for playing a role in an inclusive workplace environment. True allies will not expect anything in return for their allyship and will be constantly working to improve by engaging in meaningful conversations with those around them.

Additional Tips on Being a Better Ally

As we have mentioned, being an ally is a continuos journey. It is important to be open-minded and willing to accept mistakes along the way. We created a list of additional tips to keep in mind as you continue learning:

We find that by taking the time to reflect and process information, we come to a better and more wholistic understanding of a concept. Complete a reflection based on your learnings. How do you plan to implement allyship into your own life or professional workplace as the work environment changes in the next 20 years?

Allies- take action to empower individuals, not to rescue them or put themselves in the spotlight; allies also seek to create systemic change, not one-off savior moves

Ally Cookies- praise of other rewards for "not being racist." Usually sought out by people with white privilege performing optical allyship

Intersectionallity- term coined Dr. Kimberle Crenshaw; framework that helps us to explore the dynamic between coexisting identies and connected systems of oppression particulary as it relates to gender and race

Privilege- a set of unearned benefits given to people who fit into a special social groups due to our race, class, gender, sexual orientation, language, etc.

Tokenism- the practice of making only a perfunctory or symbolic effort to do a particular thing, especially by recruiting a small number of people from underrepresented groups in order to give the appearance of sexual or racial equality in the workforce

Tone Policing- tactic used by those who have white privilege to silence those who do not by focusing on the tone of what is being said rather than the actual content. TOne policing does not only have to be spoken out loud publicly, people with white privilege often tone police BIPOC in their thoughts or behind closed-doors

White Apathy- a feeling of apathy, indifference, unconcern, detachment, dispassion, and disregard about racism by people with white privilege

White exceptionalism- the belief that people with white privilege are exempt from white supremacy; belief of being “one of the good ones”

White Fragility- state in which even a minimum amount of racial stress becomes intolerable, triggering a range of defensive moves

White Privilege- term coined by Peggy McIntosh; “an invisible package of unearned assets that I can count on cashing in each day, but about which I was “meant” to remain oblivious, white privilege is like an invisible weightless knapsack of special provisions, assurances, tools, maps, guides, etc."